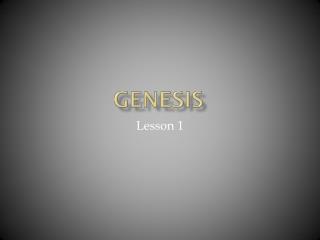 Genesis. Lesson 1. Torh. Genesis Exodus Leviticus Numbers Deuteronomy. The Book of Beginnings The Birth of the Nation The Law of the Nation The Wilderness Wanderings The Laws Reviewed. Chuck Missler. Genesis VS Revelation. Days of Creation. Day One.

The Book of Genesis - . www.bible-study-online-lessons.com. the book of genesis. lesson 2, genesis chapters 1-3 part i,

Genesis - . we have come to a turning point in the road. if we turn to the right mayhap our children and our children's

Genesis Chapter Twenty-two - . bible bowl 2013. genesis 22:1.  after abraham made a covenant with abimelech , what did

Review of Genesis 47: - . joseph presented five of his brothers and his father to pharaoh, vs. 1-12. joseph dealt very