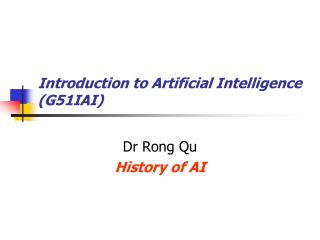 G51IAI Introduction to Artificial Intelligence - Why study ai anyway?. because it is ?cutting edge research". what

INTRODUCTION TO ARTIFICIAL INTELLIGENCE - . massimo poesio intelligent agents. what is an (intelligent) agent? (1).

Introduction to Artificial Intelligence - . ai definitions and history. what is ai? . 1950, alan turing (there was no