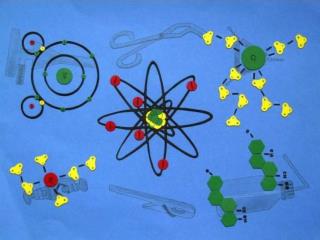 CHEMICAL BONDS. A chemical bond is formed between two atoms if the resulting arrangement of the atoms and their electrons has a lower energy than the separate atoms themselves. Two main ways of creating a chemical bond:. Complete electron transfer  IONIC BOND.

Which of the following is a characteristic of chemical bonds? - . shorter bonds are generally stronger than longer bonds.

Chemical Bonds - . valence electrons are those electrons in the outermost shell of an atom that can be used to form a

Chemical Reactions or “Bonds Away” with Valence Electrons - . review valence electrons principles of “bonds away”

CHEMICAL BONDS - . the forces that hold two or more atoms together and make them function as a unit . a chemical bond is

Atomic Bonds [aka chemical bonds] - . what is a bond ? so what is an atomic bond? an attractive force between 2 atoms.

Chemical Bonds &amp; Reactions - . -. +. +. -. chemical bond. a force of attraction that holds two atoms together has

Chapter 2 - . the chemical basis of life. key concepts. molecules form when atoms bond to each other. chemical bonds are

Chemical Bonds: - The attractive (intramolecular) forces, ie.“ the glue” , strong enough to maintain a group of