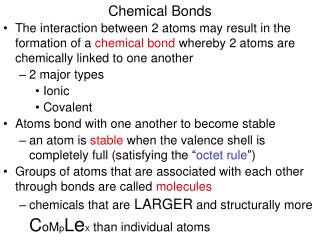 Chemical Bonds. The interaction between 2 atoms may result in the formation of a chemical bond whereby 2 atoms are chemically linked to one another 2 major types Ionic Covalent Atoms bond with one another to become stable Chemical Bonds - . atoms gain or lose electrons through chemical reactions to gain a filled outer shell and therefore a

Chemical Bonds - . an electrical attraction between two oppositely charged atoms or groups of atoms. happens when an atom

Chemical Bonds: - The attractive (intramolecular) forces, ie.“ the glue” , strong enough to maintain a group of

Chemical Bonds - . ionic bond bond formed between two ions by the transfer of electrons. ionic bond. between atoms of