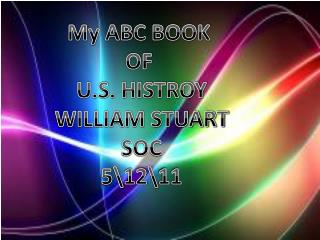 My ABC BOOK OF U.S. HISTROY WILLIAM STUART SOC 51211. A. Abolitionist- a person who strongly favors doing away with slavery. Article- a part of a document, such as the Constitution ,that deals with a single subject.

William the Conqueror - . who is william the conqueror . nationality: norman also known by the nickname: william the