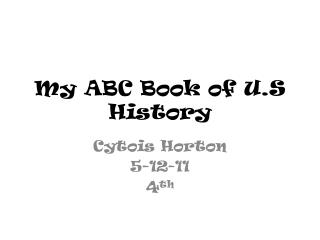 My ABC Book of U.S History . Cytois Horton 5-12-11 4 th. A. Annex- to add territory to one’s own territory . . Abolitionist- a person who strongly favors doing away with slavery. Abstain- to not take part in some activity, such as voting. . B.