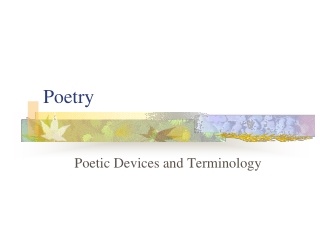 Poetry. Poetic Devices and Terminology. Speaker. The voice through which the poem is told, not necessarily the poet. Form and Structure. Lines-are what poems are written in and can vary in length. Stanzas-section of a poem which contains a group of lines, stanzas are separated by a space.