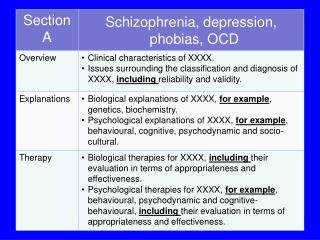 Question type no. 1. Clinical characteristics. Likely to be less than 8 marks. Must describe more than one characteristic. Some depth, not just breadth. 4 marks = 100 words. DSM-IV-TR CRITERIA for specific phobia Marked and persistent fear that is excessive or unreasonable.

Visual Field Review - . kelli shaon, o.d. interpretation of the visual field. what type of vf was performed? what are

Unit 11 Open-Ended Questions ASSESSMENT - . there are 5 questions: 1 for each story/poem and an opinion question.

Clinical Pharmacology Questions pps (15/30) - . define:. pharmacokinetics (1) what the body does to the drugs

Prior to the start of the program, please check your syllabus to ensure you have the following printed program materi

RESEARCH DESIGNS FOR QUANTITATIVE STUDIES - . what is a research design? a researcher’s overall plan for obtaining

EVIDENCE-BASED PRACTICE: WHAT’S IN IT FOR YOU? - . sharon bond, phd, cnm associate professor special thanks to: