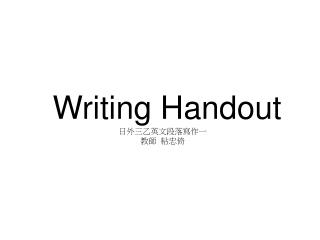 Writing Handout 日外三乙英文段落寫作一 教師 粘忠倚. ◎ Clauses → Cats are cute pets. → Serious problems will happen if you neglect this. ◎ Not Clauses → before brushing his teeth. → to catch the bus. Sentences and clauses. Clauses are the building blocks of sentences. A clause contains

Handout 3-8 - . click on the god to the right. read each statement choose the statement you believe to be correct always

WRITING FOR THE WEB - . make your web content easier to find and understand by your audience. contents.