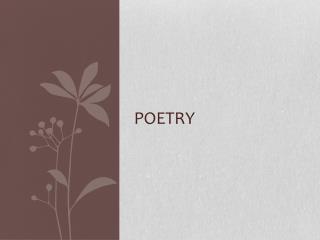 Poetry . Rhyme: the repetition of terminal sounds in two or more words. End Rhyme: Most common type- rhyme occurs at the end of the line There is a singer everyone has heard Loud, a mid-summer and a mis -wood bird Internal Rhyme: Rhyme occurs within the line of poetry

POETRY - . poetic. genres. poetic genres. to begin with, let ’ s remember that most poetry does not rhyme. poetic