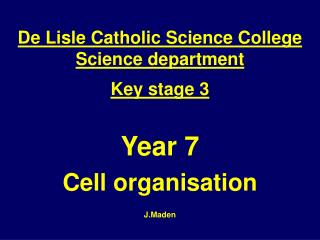 Cell Structure and Cell Organisation - . what is cell?. cell is the basic unit that build up organism. what do you call

Year 7 - . environment and feeding relationships. objectives. in today’s lesson you will learn: about the different

Year 7: - . miss tilly’s expectations:. when you come in take your bags and coats off and put them away. take your

Year 7 - . personal identity project. good morning bags on the floor, well out of the way equipment &amp; planners on

7-7 Register-Cell Design - . a single-bit cell of an iterative combinational circuit connected to a flip-flop that