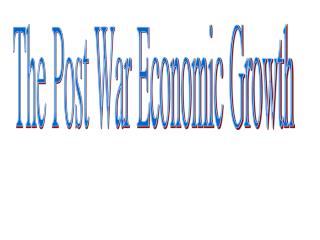 The Post War Economic Growth. US occupation and post war Reconstruction -Japan was under the command of SCAP [McArthur] -joint force set up the Far Eastern Commission in Washington and convey the Decisions through the US government to The SCAP. Political Reforms:

The Postwar Economy of the 1950’s - . by angela brown. bellringer: think and write. brainstorm a list of the inventions

Japan After World War II - . japan during the war. in 1937 japan invaded china. japan also developed ties with italy and

World War II Results/Birth of the Cold War - . - the end of wwii found soviet forces occupying most of eastern and

Cold War and Post World War II Political and Economic Issues - . what was the experience of africans in british colonies

Post World War II - . what were some of the lingering issues at the conclusion of wwii ? and how would they be solved?.

SSUSH21 The student will explain the impact of technological development and economic growth on the United States,