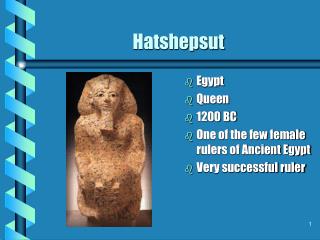 My Middle Kingdom Pharaoh - . by: danielle spriggle. the female pharaoh hatshepsut. hatshepsut was the daughter of

HATSHEPSUT - . female to male images. female statues. believed to have been made before she became ‘king’ – it

Thutmose 3 - . by: jerimiah and lilli. thutmose’ family. thutmose’ father was thutmose 2 his mother was iset, he had

Hatshepsut A Woman Pharaoh By: Laura Kelley - . the story. born in the 15 th century bc, she was the daughter of tuthmose