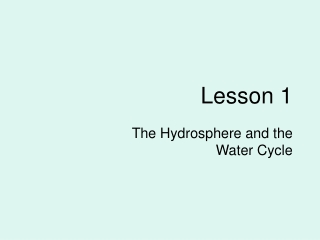 Lesson 1. The Hydrosphere and the Water Cycle. The Hydrosphere: An Overview…. 1. The hydrosphere is… the water on and in Earth’s crust a. The percentage of water found in the oceans… 97 We don’t call ourselves the Blue Planet for nothing!