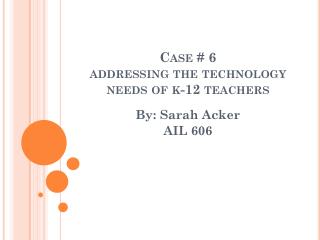 Technology Tidbits for Teachers - . cindy sheets. ‘our kids will spend the rest of their lives in the future. are we

Selecting Technology - . meeting the needs of high school teachers through technology. goals. as teachers we will prepare

Case 28: Made For Each Other? - . case discussion. objectives. discuss the reasons why firms undertake acquisitions.