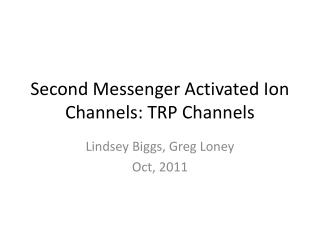 Ion Channels - . the plasma membrane is 6-8nm thick, and consists of a mosaic of lipids and proteins. the lipid is

channels - Japantvbox.com offers gift and product wrapping services at a rate of $7 per package, which also includes a

Gated Ion Channels - . a. voltage-gated na + channels. 5. generation of ap dependent only on na +. repolarization is

Channels - . 1 肝之腧在颈项 in the spring the wind comes from the east…acupuncture points on the neck… 5 truth

Ion Channels and Electrical Activity - . the cell membrane is selective. criteria for passage through the phospholipid