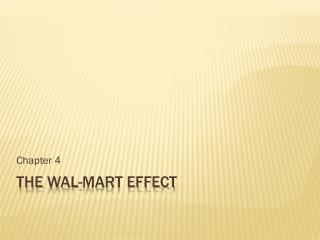 Chapter 4. The Wal -mart effect. How much did a one gallon jar of Vlasic pickles cost at Wal-Mart at its lowest price?. $2.97 per gallon. What was Vlasic eventually forced to do after his gallons of pickles were pulled from Wal-Mart’s shelves in January 2001?. File for bankruptcy.

The Wal-Mart Effect - . by delphine marini and bridget wolansky. chapter one. who knew shopping was so important?. what

The Wal-Mart Effect Chapter 6 - . brian dorward. what information did emek basker need in order to analyze the impact of