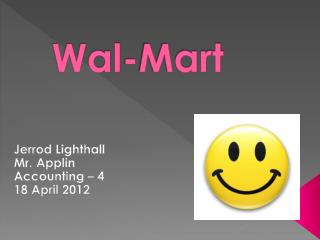 Wal-Mart. Jerrod Lighthall Mr. Applin Accounting – 4 18 April 2012. Company History. Wal-Mart is a public company. Sam Walton built the company on his beliefs in excellence in the workplace, customer service, and having the lowest prices. Boycott Wal-Mart - . by melanie george. * wal-mart is a corporation that hauls off a stunning $220 billion a year from