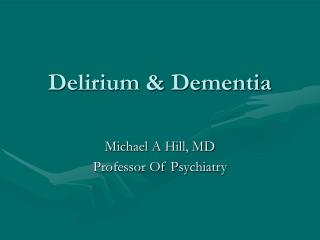 Delirium - . an overview. pre test. if you have 100 patients aged 65 and older in a hospital, how many- at any given

DELIRIUM - . background:. delirium is a common clinical syndrome with significant morbidity and mortality. it frequently

Delirium - . delirium. disturbances of consciousness a change in cognition developing over a short period of time.

The Three Ds of Confusion Delirium, Depression, Dementia - . confusion. is not a normal part of aging delirium and

Delirium - . by lauren oliver power point by: rachael rich. what kind of book is