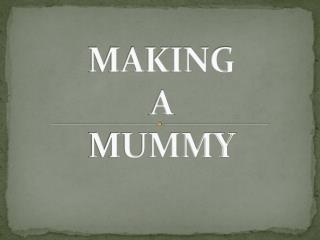 MAKING A MUMMY. STEP 1 - The body is brought to the “ ibu ” – place of purification. STEP 2 – The body is washed with palm wine and rinsed with water from the Nile River. STEP 3 – Many internal organs (not the heart) are removed from the body and packed in natron so they will dry out. Mummy - . background. ancient egypt civilization became history in 332 b.c. mummies were preserved in pyramids. due to

Mummy Riddles - . what do you call a mummy that sleeps all day?. lazybones!. where was the mummy when the lights went

Mummy and Mummette - . there was an evil e gyptian witch that lived in a fig pie and had a mysterious plan to fatten

To My Mummy  - . by charlotte davies. reasons why i love you . your an amazing mum your caring your beautiful your

The Mummy Zone - A b c y z mysteries. the mummy zone . by omar abdel kader. table of contents. the strangest walk

The Nice Mummy - . by: hayden room:8 grade:3. once apon a time there were 3mean monsters. they lived in a big forest. the

letter To mummy squirrel - . by evan. by

letter to mummy squirrel - . by jaskaran. by

Revenge of the Mummy, Orlando - Found within

The Mummy in the Sarcophagus - . thacker gallery. asking questions. we could ask anything we wanted about the mummy. she