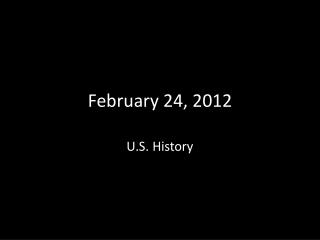 February 24, 2012. U.S. History. 10-4: From Confederation to Constitution. Meeting called May 1787 to strengthen national government “for the sole and express purpose of revising the Articles of Confederation”. Shay’s Rebellion. February 24, 2012 - . how to avoid an after school detention: sit down… quietly. start independent reading. do steps

Andrew Bruce 24 February 2012 - . cipfa scottish treasury management forum workshop. who we are and what we do.....

February 24, 2011 - . no writing prompt –please get out your vocabulary vocabulary review “lamb to the slaughter”

February 24, 2014 - Welcome have a quiet seat make sure that you are in uniform copy down your homework for tonight (we

February 20-24 - . poetry/new novel. do now. look at your symbolism worksheet and describe what each symbol stands for in