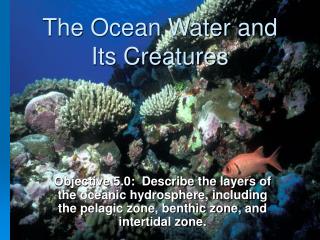 The Ocean Water and Its Creatures. Objective 5.0: Describe the layers of the oceanic hydrosphere, including the pelagic zone, benthic zone, and intertidal zone. Marine Ecosystems: are ecosystems based upon salty water. A. Cover ¾ of Earth’s surface & contain 97% of Earth’s water supply Introduction to Plankton - . what exactly are plankton?. animals. plants and animals that live in the water and cannot

The Dynamic Ocean - . chapter 16. ocean current -mass of ocean water that flows from one place to another surface

Ocean Water Chemistry - . on average how many grams of salt are in a pot of ocean water? what is the chemical name for

Features of Water - . basic geography 2. the oceans of planet earth have four major parts. we often think of these parts

Ocean Currents - . ocean water circulates in currents caused by wind and by density differences currents are the flow of

Living Under the Sea! - . what is one of the most dangerous creatures in the sea? what sprays ink in the ocean? ahhh !

Water Facts - . ocean water is about 3x as salty as human blood. brackish water salt water. why is the ocean salty?.

Science: Under The Sea For Kindergarten - . what i hope my students learn: to become more knowledgeable with life under

Hydrologic cycle describes recycling of water near Earth ’ s surface - . p. ~90% of water that evaporates over the