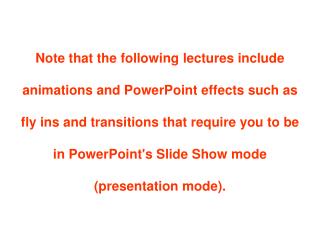 Note that the following lectures include animations and PowerPoint effects such as fly ins and transitions that require you to be in PowerPoint's Slide Show mode (presentation mode). Light and Telescopes. Chapter 6. Guidepost. Light and telescopes - . just by analyzing the light received from a star, astronomers can retrieve information about a

Telescopes (Chapter 6) - . based on chapter 6. this material will be useful for understanding chapters 7 and 10 on “our

Different Types of Telescopes (that do not use visible light) - . visible light is only one part of the electromagnetic

OTHER TELESCOPES - . other telescopes. radio telescopes fundamental design similar to optical telescopes. made up of

Telescopes - . a telescope is an instrument specifically designed to view remote objects through use of electromagnetic

Light as a Tool - . gravity is one major tool for astronomy; light is the another. topics on light/radiation: light as a

Light and Telescopes - . a telescope is a tool used to gather light from objects in the universe. there are two different