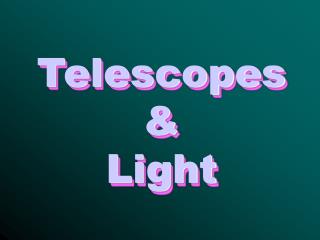 Telescopes & Light. The Powers of a Telescope. Light Gathering Power : Astronomers prefer *large* telescopes. A large telescope can intercept and focus more starlight than does a small telescope. A larger telescope will produce brighter images and will be able to detect fainter objects. . LIVE INTERACTIVE LEARNING @ YOUR DESKTOP - . nasa/nsta web seminar series how telescopes have changed our view of the

CELLS: The Building Blocks of Life - . history of the cell. robert hooke is a scientist from england. he experimented

X-Ray Vision - . why is it important to progress to bigger and better telescopes?. rosat all sky survey. chandra. hubble.