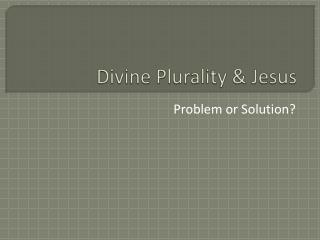 Divine Plurality & Jesus. Problem or Solution?. First Thoughts. Questions : Is divine plurality a problem for …. Monotheism? A Godhead? Jesus as God. First Thoughts. Answers : What about monotheism? Yahweh is an elohim , but no elohim is Yahweh Yahweh is ontologically unique JUST A LITTLE TALK WITH JESUS - . what is the “godhead?” if they are all one, why can’t we sing, “have a little