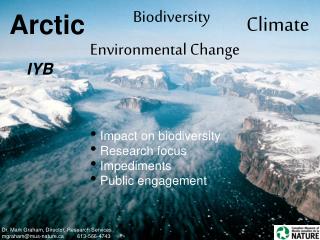 Arctic - . arctic is the area around the north pole. it consists of arctic ocean and parts of canada, russia, greenland,

Arctic Wolves - . by oscar. where they live. the artic wolf is a wild dog that lives in the canadian artic. it is a fast

ARCTIC TUNDRA - . victoria &amp; ye jung. victoria! we have to go to the tundra for our project!!. what? how? our

Arctic Fox - . by alan ms. weinberg. arctic fox. why i chose my animal?. i chose the arctic fox because they are very

Arctic Animals - . by rosemarie. click on an arctic animal. this whale is swimming in its habbitat. this harp seal is

Arctic Animals - . by anne , tyler, lyla, and carson. anne's animal is the … lemming. the lemming is a mouse. the eyes

The Arctic - . what comes to mind?. muslims in the arctic?. http://www.youtube.com/watch?v=30eruumhkao. location… .

Arctic Plums - . by brian fawcett. memories - ending. did the memoir bring to mind any memories from your own childhood?