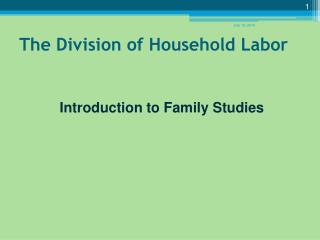 The Division of Household Labor

The Division of Household Labor. Introduction to Family Studies. Blog Assignments. 7 of 8 blog assignments MUST be completed by next Wed. a.m. APA Style. APA stands for American Psychological Association http://owl.english.purdue.edu/owl/resource/560/07/.

The Division of Household Labor

Cohabitation vs. Marriage and the effects of each on relationships - . caylen ownby tyra roy lauren terry kathryn venice.

Marriage - . traditional reasons for marriage: sexual division of labor to have legitimate children and provide for them

Effect of Increasing Division of Labor on Gender Inequality - . shift to production for exchange surplus held by a few

Does gender matter for trade performance and competitiveness? - Stephanie seguino university of vermont. does gender

Gender and Inequality - . gender – the personal traits and social positions that members of a society attach to being

Equal sharing of responsibilities between women and men including care-giving in the context of HIV/AIDS - . “what’s

N.C. Department of Labor OSH Division - . multi-employer worksites in construction. objectives. in this course, we will: