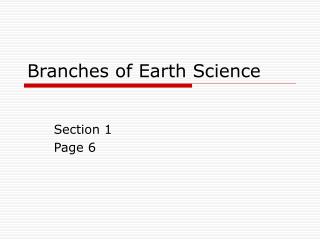 Branches of Earth Science . Section 1 Page 6. Daily Science Question:. Imagine that you are an Earth scientist and can travel wherever you want to on Earth. Describe the aspects or features of Earth that you would like to study. Explain where you would go and what you would do.

Chapter 4 - . accounting for branches and combined financial statements. objectives of this chapter. to learn the

HUMAN ANATOMY AS A SCIENCE - . human anatomy department dr. angela babuci. plan of the lecture. anatomy as a science and