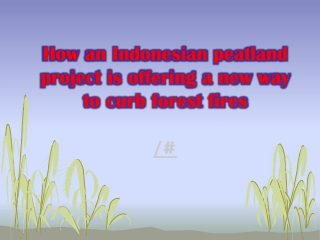 How an Indonesian peatland project is offering a new way to “Fire stormed this area — including that land across from here,” said Muhrizal Sarwani, the head of the Agricultural Land Resources Agency (BBSLDP), pointing at an abandoned field across a nearby ditch. “All other places were affected by the fire, except for this site.”

How an Indonesian peatland project is offering a new way to

Why Indonesian Earthquakes and Volcanoes Happen - . by vanessa,maddy and grant. earthquakes. here is a pic after an

PEATLAND FORESTRY Where are we now? - . juhani päivänen university of helsinki feb. 13-15, 2009. renewable resource of

VERB - . sarah: do you always translate the letters into english ? ann : no , only if my boss has indonesian ones.