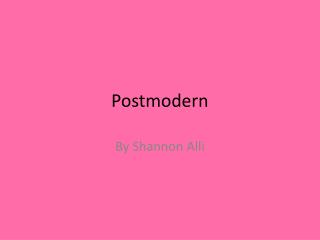 Postmodernism - . postmodern thought lesson 1. philosophy – “the system of values by which one lives” (american

The Biopolitics of Postmodern Bodies: Constitutions of Self in Immune System Discourse Donna Haraway - . prepared by: dr.

Christianity Versus - . “beware lest anyone cheat you through philosophy and empty deceit, according to the tradition

IT in Education: Sociological Perspective - The development of it &amp; the rise of the postmodern &amp;