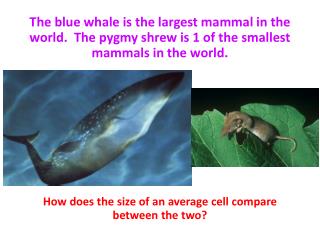 The blue whale is the largest mammal in the world. The pygmy shrew is 1 of the smallest mammals in the world. How does the size of an average cell compare between the two?.

Cell Growth and Division - . chapter 10 chromosomes, mitosis and regulation. why do cells divide?. purpose? is it a set

The Cell Cycle: Cell Growth, Cell Division - . where it all began…. you started as a cell smaller than a period at the

Cellular growth and Reproduction - . how large are cells?. most cells are less than 100 μ m in diameter why do you think

Cell Growth and Reproduction - . cell growth and reproduction section 8.2. the cells that make up multicellular organisms

Ch 10- Cell Growth - . what problems does growth cause for the cell? larger a cell becomes, the more demands that cell

Cell Growth and Reproduction Mitosis and Meiosis - . surface area to volume ratio. a cell is 2mm x 2mm x 2mm what is its

Cell Growth and Division - . chapter 10. why do cells divide? . as the cell grows the dna has an increased work load. as