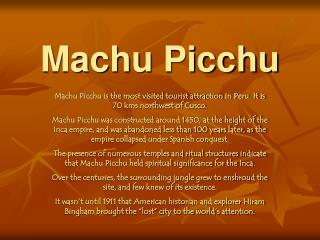 Machu Picchu. Machu Picchu is the most visited tourist attraction in Peru. It is 70 kms northwest of Cusco. Machu Picchu was constructed around 1450, at the height of the Inca empire, and was abandoned less than 100 years later, as the empire collapsed under Spanish conquest. Machu Picchu - . by : stephanie herrera and michael sa. who invented machu picchu?. the construction of machu picchu was

MACHU PICCHU - . by mercedes kraszewski. located high in the peruvian andes, machu picchu was hidden from the outside

Machu Picchu - . ancient city of the inca located in the andes mountains in peru hiram bingham rediscovered it in

Machu Picchu - . by: emily marshall. who. the incas they had a huge empire with 9 million people in it coming from 100