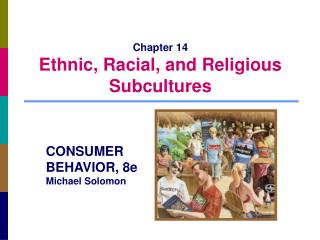 Chapter 14 Ethnic, Racial, and Religious Subcultures. CONSUMER BEHAVIOR, 8e Michael Solomon. Chapter Objectives. When you finish this chapter you should understand why: Our memberships in ethnic, racial, and religious subcultures often play a big role in guiding our consumption behaviors.

Ethnic Groups and Religious Groups - . what is the difference?. what is culture?. culture consists of the beliefs,

Chapter 14: Consumer Relations - . a dose of reality for you……. the world has become one global society of consumers.