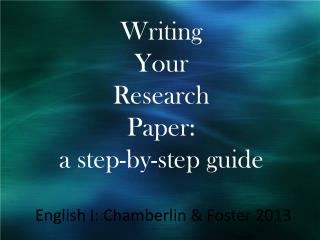 Writing Your Research Paper: a step-by-step guide. English I: Chamberlin & Foster 2013. The Introduction: . Sentence 1: The Opener Use a powerful quote, a short story, or an important fact to get your reader’s attention Sentence 2-3: General Information about your artist Step By Step Writing - The five elements of expository writing. organization is the key.topic sentences and thesis

A Step-by-Step Guide to TOK Presentation - . the only thing all about you is the grade:-]. the important parts of the

A Step-by-Step Guide to Building your Career - . brought to you by career and employment services schenectady county

Step-By-Step Organization of a Research Paper by Julius Zuke - . these steps assume that students have located resources,

A Step by Step Guide for Research Papers - . steve wood tccc. a successful investigation and research assignment. a

Step By Step Guide - . for how to use our new online absentee bidding system. step 1. from our website

Obtaining a BRN a step-by-step guide - . what you need before you start. the full name, registered address and date of

A Step by Step Guide to Writing A Research Paper - . step 1: choose a topic. think about and read over what we have

Step-By-Step Guide - For current residents. step-by-step guide. i am going to be a sophomore and i would like to move off