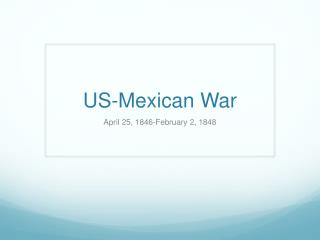 US MEXICAN WAR - . by: faith earl and morgan mastrogiacomo. james k. polk. was the united states president during this

Mexican American War - . how did the revolution in texas lead to war with mexico? what issues led anglo-texans and

Mexican-American War - . objective: learn about the war and how it defined the current southern border of the u.s.

Mexican-American War - . objective: learn about the war and how it defined the current southern border of the u.s.

Mexican War Essay - . america's war with mexico has been labeled, both then and since, an unprovoked and unjustifiable

The Mexican War - . why do you think america got involved in a war with mexico?. y a n k e e d o o d l e. they attacked

Mexican Drug War - . by: taylor conley and sheyla artiga. understanding the proble m. the mexican drug war is mainly due

The Mexican War - . manifest destiny continued. the mexican war. how did the united states gain oregon and texas? what