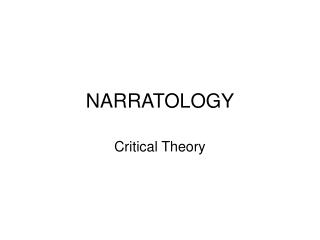 NARRATOLOGY. Critical Theory. Narratology: what is it?!. The study of narrative structures How narratives make meaning What the basic mechanisms and procedures are which are common to all acts of story-telling. . What Narratology is NOT!. NARRATOLOGY - . g.m. adhyanggono, s.s.,m.a. definition. the study of how narratives (stories) make meaning, and what the

1.3 An Introduction to Narratology

Storytelling: The Narratology of Women’s Medical Writing - A shleigh.blackwood@northumbria.ac.uk. storytelling: the

Ludology vs. Narratology or those were the days - . miguel sicart computer game theory spring 2005. today’s menu. a