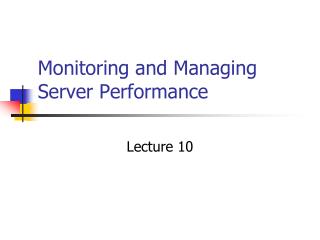 Server monitoring and maintenance - Need the best it server maintenance and support for your data center servers?

Monitoring and Managing Memory - . objectives. after completing this lesson, you should be able to: describe the memory

Monitoring and Managing Storage - . objectives. after completing this lesson, you should be able to: tune redo writing

Managing Information and Monitoring Performance in the Water Industry - . the company. 450 employees 1,600,000 customers

Managing Quality and Performance - . week 10. the meaning of control. organizational control is the systematic process

Performance Managing - Importance of performance managing- it helps in developing skills &amp; competency of the