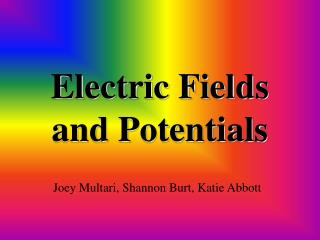 Electric Energies and Potentials - . a positive charge might be placed at one of three spots in a region where there is a

Electric Forces and Electric Fields - . the primary particle that carries charge (and therefore can be lost or gained) in

Electric Fields - . 20.4-20.5. questions. if nothing existed to experience the gravitational field of earth, would the

Electric Fields - . what is electric field??. let's take a single electric charge, q , and put it somewhere. the space