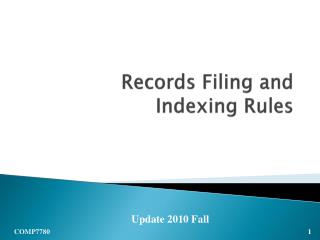 Records Filing and Indexing Rules. Update 2010 Fall. Records Filing. A filing method, sometimes called storing method, describes the way in which records are stored in a container, such as cabinet. Filing is done to facilitate retrieving information Follow filing methods, procedures and rules.

What is ITR filing 09891200793? - You are required to file these tax return forms with the income tax department. the

OST184 Records Management - . rule 5 - titles and suffixes. a. personal names a suffix or title is always the last

Document Indexing - . document indexing is the process of associating or tagging documents with different “search”

RECORDS MANAGEMENT: IDENTIFY, TRANSFER &amp; DISPOSAL OF RECORDS - . what is a

NAIC Filing Exemption (FE ) Rule - . what is fe? a new rule adopted by the naic which grants exemption from filing with