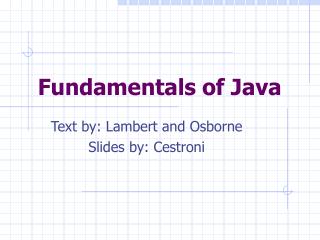 Java Programming - . presented by daniel rosenthal friday, november 30 th , 2007. java. java is a platform and a

Objectives In this lesson, you will learn to: Appreciate the need for object-oriented programming - Compare oops with

Starting Out with Java: From Control Structures through Objects Fifth Edition by Tony Gaddis - . chapter 2: java