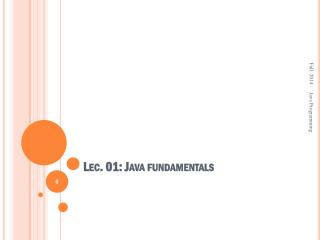 Java - . control structures: repetition. objectives. be able to use a loop to implement a repetitive algorithm practice,

This is Java Jeopardy - . to final jeopardy. what is helloworld. (with no space between the two words)?. this would be

Java Upcasting and Downcasting - . click here for example html or see the “java upcasting and downcasting” link on

eTime ® Java Pop-ups - . if the following pop-up is received when logging into etime ® as either practitioner or

Java and XML (DOM and SAX) - . some of the material for these slides came from the following sources: “xml a

Java Script - . javascript is a new scripting language which is being developed by netscape . with java script you can