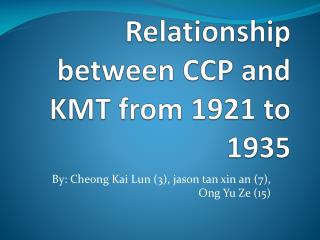 Relations Between the CCP and GMD after the Warlord Era - . the jiangxi soviet the encirclement campaign. recap. what

Conflict in China: The Chinese Civil War and More - . questions to ponder…. what problems did the new republic of china

The Chinese Civil War - . “the people of china have stood up.” mao zedong.

Describe Relations between the CCP and the GMD between: 1921-1935 - . the soviet union had recognized china as a

THE CHINESE CIVIL WAR - . first phase 1927-1937. objectives. what were the strategies and objectives of the gmd and the

The chinese communist revolution - . background. china becomes a republic in 1911 under sun yat-sen republic must work to

What was ‘Mao Zedong Thought’? - . l/o – to identify the key features of maoism and to explain how it influenced