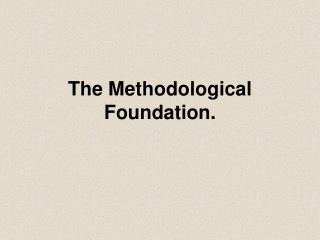 The Methodological Foundation. Is there such a thing as progress in political science? Do we know more than the Ancients?. Methodological Progress. Personal computers (1981) Sophisticated software for both quantitative (SPSS) and qualitative (NUD.IST, QUALRUS) analysis. The Internet CMGPD-LN Methodological Lecture - . day 1 why use historical data? origins of the cmgpd-ln basic characteristics of the

The W hat, Where, and How of Foundation Problems - . roger williamson williamson foundation repair. what causes

The Rise of the Methodological Approach - . the term &quot; software crisis &quot; was coined during the nato

A Design Science (Multi-Methodological) Approach to IS Research - . presented by: dr. jay f. nunamaker , jr. a