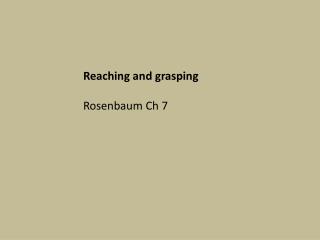 Reaching and grasping Rosenbaum Ch 7. Factors in control of reach: Learnt motor program for ballistic phase ( feedforward ) Feedback during reach from vision or proprioception . Ballistic component might rely on a simple property of muscles, that is, muscles are like springs . Reaching and Grasping - . reaching control synthetic human arm to reach for object or position in space while possibly

Reaching and Grasping: what problems does the brain have to solve? - . flipping an egg. autonomous control: robot is