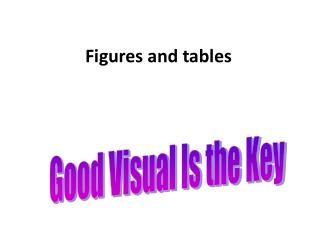 Figures and tables. Good Visual Is the Key. The most important part of your paper. Many readers don’t read the text, but look at figures and tables first. Tables Presents lists of numbers/ text in columns Figures

Tables, Graphs &amp; Figures - . creating a table. tables should be arranged so that all the data for a given sample

Tables and Figures - . the “big picture”. for other scientists to understand the significance of your