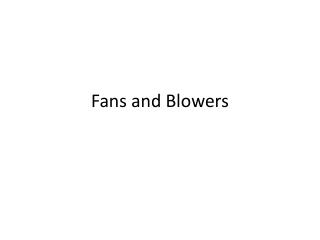 Fans and Blowers. Introduction. Fans and blowers provide air for ventilation and industrial process requirements. Fans generate a pressure to move air (or gases) against a resistance caused by ducts, dampers, or other components Remanufactured Blowers - If you are on a lookout for remanufactured blowers, then youu2019re seeing right at it. surefin

Blowers, Motors and Belts - . this power point presentation will review section c2 in the student handout packet. you may

Fans - . as media studies. what is a fan?. would you say that you were a fan?. the dictionary definition of a fan: “

Fans - . fans. purpose: to supply the necessary static pressure to move air in a ventilation or exhaust system. basic

FANS - . an airline perspective. some facts. 1983 a group of experts, tasked by icao made recommendations to upgrade the

Roots Blowers and its Functions - Roots blowers have a unique mechanism and traditional use since a very long time. they