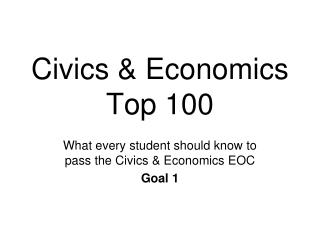 Civics & Economics Top 100. What every student should know to pass the Civics & Economics EOC Goal 1. Goal 1: The learner will investigate the foundations of the American political system and explore basic values and principles of American democracy. Colonial Regional Differences.

NORTH CAROLINA CIVICS AND ECONOMICS REVIEW - . instructions for use:. a) click mouse and a question will appear with

Civics and Economics – 2/3/11 - . do now: explain the four major problems the constitutional convention had to try and

What is Civics? - . why study it? why do we need governments? what type of governments exist?. civics is the study of the

The Classic Dictionary of Civics and Economics - . created by: kristen. goal 6. purpose, development, and implementation

Task Force on Civics and Financial Education - . presentation to the oregon state board of education january 15, 2009

Economics 101 - . why societies have economics. trade = the exchange of goods and services economics = the study of the

CIVICS 11 - . course introduction. what is civics?. the study of the rights and duties of citizenship. what is

Civics Notebook - Samantha gamez’s. civics notebook. april 16, 2010. 1. which of the following duties of a district

American Civics: The Introduction - . how to succeed in civics without really trying (very much). taking notes: note

Economics - . economics. -economics -the system that society uses to produce and distribute goods and services -why

Why Societies Have Economies - . civics and economics 101. what are the basic wants or needs which every society must