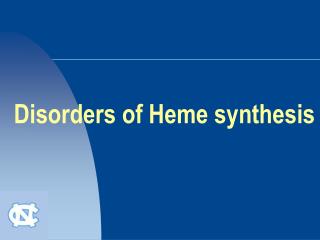 Thyroid Drugs - . kaukab azim, mbbs, phd. learning outcomes. by the end of the course the students should be able to

Thyroid Disorders - . thyroid hormones include: thyroxine t4 and triiodothyronine t3 their synthesis and release depend

Porphyrin Ring Synthesis and Breakdown - . daniel wellman. what are they?. porphyrin rings are biological molecules used