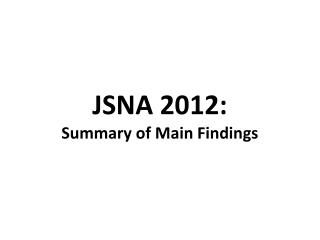 JSNA 2012: Summary of Main Findings. Infant mortality trend, England, Yorkshire and Humber and North East Lincolnshire. There have been big reductions in infant mortality in NE Lincs since 2007 and our rates are now amongst the lowest in the region.

HOMELESS HEALTH NEEDS AUDIT - . overview of the homeless health needs audit. what is the health audit?. a tool to assess