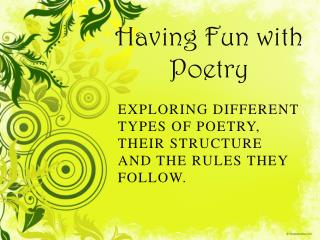 Having Fun with Poetry Having Fun with Poetry. Exploring different types of poetry, their structure and the rules they follow. We’re going to be looking at:. Limerick Haiku Acrostic Diamante Cinquain. Kennings Free Verse Sonnet Concrete. Limerick. Five Lines One couplet One triplet

Having Fun with Poetry

Writing your own Poetry - . * aesthetics * introduction * task * process * resources * evaluation. what is poetry?. an

Just Because Poem - . notice the structure/form?. just because i’m scared don’t laugh and giggle behind my back

Poems by Year 6 - . by courtney cockings. summer a bluebell and a golden daffodil laying among the other flowers all day

Cool Poetry Activities for Sixth Grade By: Ms. Williams 2013 - . the activities in this power point contain the following

Clerihew - . what are clerihews?. funny poems you write about specific people. such as …. your parents your teacher

Funny Poems - . class 2a. my dog is not the smartest dog. click to

Poetry is FUN - . poetic forms. cinquain poetry. originated in 1909 by adelaide crapsy she was inspired by the japanese

Poetry Across the Curriculum - . tpo:. we will recognize how poetry can be incorporated into any classroom to enhance

Free Verse, slam poetry - . learning goal. today we will be exploring free verse and slam poetry. this lesson will draw

Writing Poems - . teaching your students about poetry by having them write poems. why have students write poems?.

Parody Poems - . parody. a literary or artistic work that imitates the characteristic style of an author or a work for

Poem Book By Brian Chalmers - . poems not written by me. form. line - a single verse of poetry. i am fast and fun i am

Exploring Poetry - . poetry poetry is simply a method of writing that contains a lot of information in a small package.

Poetry is FUN - . poetic forms. concrete poem. this form of poetry has been around since the 1500s. it was originally